A few words from SSD Nodes

Find the best deals in cloud hosting at SSD Nodes. Get high-resource and high-performance Linux VPS for up to 90% less than our biggest competitors. Choose from multiple locations worldwide, high-speed SSD or NVMe storage options and plans for every project, big or small. Our engineers have build a highly resilient and reliable network using top-of the-line hardware. Host your projects with confidence with a 99.9% uptime SLA and a 14-day money-back guarantee. Stop overpaying for cloud hosting today. 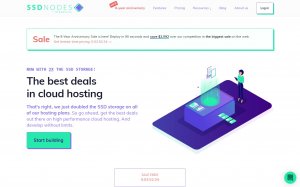 James Mark, Nov. 9, 2019
4.6
SSDnodes is a solid company. As a provider, good reliability, services and price, these guys are hard to beat. As a technical guy, access to the shell directly and ability to configure applications an...Read Mored services on classic bash saves time and reduces training/skill overhead. Also, I have found Web fronted applications and service configurations often do not implement full expected features, aggravating business and technical users. As a business owner, I have no time for workloads we are not getting paid to do and workarounds that may introduce risks. Ability to self-host, control the distribution of internal content and have visibility on our service stack keeps our customer service/accountability high. SSDnodes self hosting has been a good partner in making that possible.Less

SSD Nodes - Too Good to be True

1.0
VPS KVM / X-LARGE
Been with them for several years, never really had any problems with them. And service was good, recently decided to go for a 3 year service plan with them, based on past experience and the price, though it was a good deal. It was...Read More not a good deal. Suffered from extremely poor service, as others have noted, you do not get what you are promised. Services are severely oversold. Seems like a bait and switch they may have been okay a few years ago, but now its just oversold and you do not get anywhere near the resources that are promised. I tried to cancel within the 14 days of the new service, but they do not allow you to cancel for a refund, only a credit. Why would I want a credit if the service they are going to provide is nowhere near what they can deliver? It's a bait and switch, avoid at all costs.Less
Reply Change review Helpful (3)
Leo ashcraft from United States, Nov. 19, 2020

1.0
VPS KVM / LARGE
this is a scamming company. they charged me a year renewal one day before it was due and my PayPal. And now are refusing to refund the $149 they took from my PayPal account. instead of offering a credit. Obviously I don't want a c...Read Moreredit if I want to cancel service. I've reported this to PayPal as unauthorized activity because I didn't authorize the renewal. This wasn't on a recurring PayPal plan I don't know how they were able to charge again but the charge me $149 and refused to return it. I reported it to ssdnodes within 3 hours of this happening. I set the service up November 19th 2019. They charged me for the renewal on November 18th 2020 one day before it expired. So I had canceled it before it has expired but still for a company tough attempt to hold my money like this is unbelievable. No I don't want a credit with SSD knows I don't ever want to do business with him again. But as I told them if my situation changed I would have returned in January 20-21 however he'll know that's not going to happen. Instead I've disputed it with PayPal as unauthorized and now reporting it as fraud since they charge me a day ahead of time. And I'm going to spread it across far and wide all social media I'll get my $149 back from PayPal. But I'm going to cost SSD nodes much more than $149 by letting everyone know how they do businessLess
Reply Change review Helpful (6)
Jason K from Canada, Feb. 26, 2020

4.4
VPS KVM / X-LARGE
When I went looking for VPS nodes to host a small cloud service, I started looking at more well known hosting providers first before finding SSDNodes. However, the pricing of these other service providers was much more and they we...Read Moreren't really offering more feature value for the money. We wanted to host in Canada to start with, but have the ability to deploy in other locations worldwide over time and SSDNodes enables this.

I decided to try one server first before committing to more nodes. I played with it for a few days and confirmed that it was solid by installing software and running performance tests. The support team was prompt to deal with questions I had so I decided to get several more nodes. I have since been using them without issue, having installed several applications and running active services as well as our website.

About the only areas for improvement that I see are:
1) Private networking between instances - I achieved this with a VPN package for now
2) Ability to attach more disk - what I have will work for a while but having more disk will be what makes sure I continue to use their services

That said, I have seen them roll out 2 new additions since I joined only a few months ago so I expect to see a stream of improvements going forward. They seem committed to adding continual value for their subscribers.Less
Reply Change review Helpful (1)
Web Domains By Proxy from United States, Feb. 15, 2020

Be VERY Careful - You are being Warned!!! - STAY AWAY - Save Money and Stress

1.0
VPS KVM / X-LARGE
I had previously tried their service in 2018 but VPS out of North America data center was very slow in Asia. I sent them ping responses and all the details they asked but they were unable to make it better so I canceled the servic...Read Moree within allowed 14 days.

Now after 2 years, they started VPS from Frankfurt datacenter so I wanted to give them another try due to attractive prices for 3 years; so ordered a VPS. Everything looked good until when I tried to purchase additional IP, I was told no additional IP was sold. Why would you not disclose before placing the order? Second issue, support turn-around time was very bad and no phone number to call. Third problem I faced when VPS was unaccesible, I found Console was disabled in their custom version of WHMCS. Lastly, I was not able to remove my credit card info (I know WHMCS provides this but they had it disabled). Due to these issues, I raised ticket for cancellation leveraging the 14 days refund guarantee provided. Guess what... here comes the catch of so good prices to be true... I was shocked when I was told that 14-days refund was ONLY offered to new customers. Wow... what a trap! I paid for 3 years of service ONLY with assurance that I have 14 days refund guarantee offered to try out and it was my first order in this new data center. After going back and forth for a month, finally I started dispute with credit card company but they decide din merchant's favor due to hidden terms & conditions listed somewhere on their website stated that 14-days refund only applies to first order. My bad, I should have read that and could have used different email address with new account. Any way, the worse part is not over yet... after losing the dispute, they suspended the VPS also. So now I have lost almost $300 and no server. STAY AWAY!Less
Reply Change review Helpful (3)
James Mark from United States, Nov. 9, 2019

Really good company, been with them for years.

4.6
VPS KVM / X-LARGE
SSDnodes is a solid company. As a provider, good reliability, services and price, these guys are hard to beat. As a technical guy, access to the shell directly and ability to configure applications and services on classic bash sav...Read Morees time and reduces training/skill overhead. Also, I have found Web fronted applications and service configurations often do not implement full expected features, aggravating business and technical users. As a business owner, I have no time for workloads we are not getting paid to do and workarounds that may introduce risks. Ability to self-host, control the distribution of internal content and have visibility on our service stack keeps our customer service/accountability high. SSDnodes self hosting has been a good partner in making that possible.Less
Reply Change review Helpful (3)
arsalan mirbozorgi from United Kingdom, Nov. 5, 2019

After many years of using SSD Nodes for production needs, I'm still just as happy as day one!

5.0
VPS KVM / 2X-LARGE
I've been using SSD Nodes for over half a decade now, and during that time I've watched tremendous growth from the company take place. They started as an OpenVZ host, and have grown and evolved to offer a range of KVM and NVMe sol...Read Moreutions during that time. Despite all the explosive growth, what made SSD Nodes great has still remained untouched. Uptime is absolutely rock solid - production worthy uptime. Support is still very good too, and their customer control panel empowers me to do enough that I rarely ever need to reach out with questions.

I've been running a variety of production websites and web related applications on a server with them over the years, and have gone through many upgrades (OpenVZ -> KVM -> bigger/faster KVM) and have had no issues with any of the servers or upgrades.

You get way more from SSD Nodes than many of their big name competitors, but they don't sacrifice quality or support and are able to do provide not just bigger servers, but better service all around.

During this time I have cancelled services with other providers, both bigger and smaller, and happily consolidated all my services onto SSD Nodes.Less
Reply Change review Helpful (1)
David Johnson from United States, Nov. 4, 2019

5.0
VPS KVM / 2X-LARGE
The service and performance is far better than you can get from other more expensive VPS hosting companies, I've been with them since 2016 and never experienced an outage or any kind of data loss with them, I've had two issue sinc...Read Moree signing up the first was after an IP address change that had blocked ports which was taken care very quickly with a support ticket the second was a rDNS problem which was also corrected very quickly with a support ticket. I highly recommend SSD Nodes for you hosting needs.Less
Reply Change review Helpful (0)
12…7 Show More Reviews
1 - 8 of 50 Reviews