Netlify, the most popular platform for building, deploying, and hosting websites and apps, has raised $105 million in new funding. With the latest Series D round, the company is valued at $2 billion. 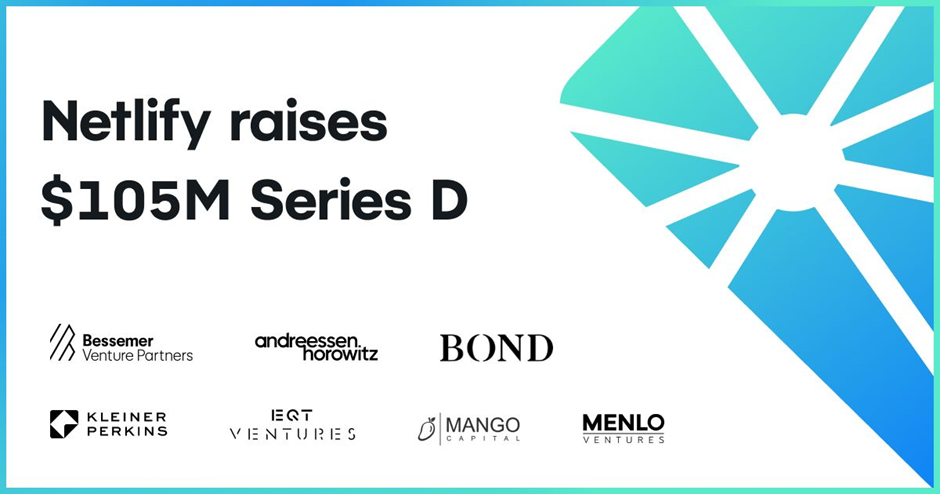 Jay Simons, who serves the role of a General Partner at BOND, had this to say:

Netlify doubled the number of developers who have used their platform this year, and the Jamstack ecosystem is growing equally as fast. Matt, Chris, and the team are true developer champions and are delivering a premium experience for the builders of the web. We’re happy to support Netlify as it becomes the next big developer-first success story.

Netlify is a California-based company offering hosting and backend services for apps and websites. It provides web hosting for sites whose files are stored in Git and generated into web content files served via a CDN.

According to estimates, each month, 16% of the Internet population visits a Netlify-powered website. Furthermore, the company has raised $212 million in funding to date.

Netlify’s technology allows developers to connect their code repository of choice, such as GitHub, and add build settings. The provider deploys the website or app across an app delivery network, eliminating the need for finding a host, uploading app support files, and configuring domain settings.

Millions of developers, including big names, Adyen, Affirm, AutoDesk, Box, H&R Block, Klépierre, Okta, ServiceNow, Twilio, Unilever and VMware have used the NetlifyJamstack for creating dynamic, scalable, and secure apps. However, they had to build their middleware and workstreams to connect the now decoupled tools and technologies needed for development.

Now, Netlify further expands its platform to serve its customers better. Jamstack will directly deliver a workflow and productivity natively integrating with every significant web framework, API, and developer tool.

For this cause, Netlify has announced the acquisition of OneGraph, a powerful GraphQL platform that simplifies the integration and management of APIs and services that support web apps. In turn, customers will compose apps using the best developer tools on the market even more efficiently.

Very proud to share @BessemerVP Growth is leading the $105M Series D in @Netlify at a $2Bn valuation, joining @biilmann, @Chr_Bach, @marcusbragg and the 2M developers in the Netlify community to transform web development and unite the Jamstack ecosystem!https://t.co/cSjk3IbJQP

Matt Biilmann, who serves the roles of a CEO and co-founder at Netlify, had this to say:

The innovation happening within the Jamstack ecosystem is a powerful preview of what the modern web will become. This latest investment will bolster the ecosystem at both the technical and community levels, empowering developers around the world to become the composers of the modern web.

[affiliate-link vendor=”104264″ ]Netlify[/affiliate-link] is creating the Netlify Jamstack Innovation Fund. It aims to invest $10 million, providing business support for emerging companies defining the next decade of the modern web in the Jamstack ecosystem. The company also plans on investing $1 million in direct open-source project sponsorships, project promotions, and upstream contributions from a dedicated development team.

5.0 370 reviews
4.9 109 reviews
4.8 138 reviews
HostAdvice.com provides professional web hosting reviews fully independent of any other entity. Our reviews are unbiased, honest, and apply the same evaluation standards to all those reviewed. While monetary compensation is received from a few of the companies listed on this site, compensation of services and products have no influence on the direction or conclusions of our reviews. Nor does the compensation influence our rankings for certain host companies. This compensation covers account purchasing costs, testing costs and royalties paid to reviewers.