A few words from 1usdhosting 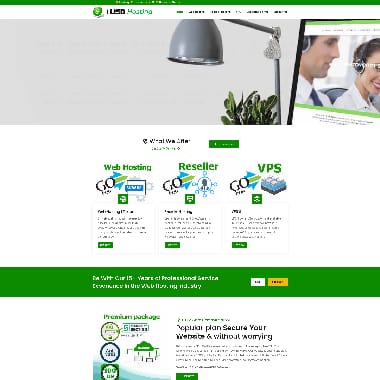 1.0
VPS
This Company does't know what is a Client, after payment, they will treat you as non value customer, if you get chance to have service(VPS for my case)they will give wrong one, they answer ticket after a week or sometimes keep quite definitely, even they never refund your money back
Reply Change review Helpful (0)
Ano Nymusky from United States, May 6, 2019

Just okay for my needs, which was pretty minimum

1.8
Shared Package 1.0
The service was barely okay and I used this site basically as a place marker in case business really picked up and mainly used it for email addresses.There was a glitch from the start when the so-called one dollar plan mysteriousl...Read Morey turned into $2.50 after I signed up but I kept the plan since overall it was still the best deal around. There was an issue early on with the mail servers kicking out errors but support was responsive and eventually resolved the issue. There was one very odd issue with invoicing. The dates were always wrong, not by a few days or even months, by YEARS. I just paid before the actually due date to avoid any problems. Two big reasons to not use 1usdhosting.com are that their web servers seem to go down frequently. It's usually for at least an hour or two so I can't imagine running an active site under those conditions. And the other reason is that competitors are giving a lot more bang for the buck with a better up-to-date hosting infrastructure. I finally ditched 1usdhosting.com after a recent issue. It was minor and quickly fixed but I didn't like the response from support. They weren't rude or anything but seemed disinterested in keeping my business. In a sense, they did me a favor because I found another hosting plan that is far better and reliable so far.Less
Reply Helpful (0)
1 - 2 of 2 Reviews

1USDHosting.com is the leader of cheap hosting plans. For a fraction of the cost of other companies, you get get shared or reseller hosting accounts, as well as virtual servers, domestic or off-shore. They don’t have many details regarding their company, which is usually not the best sign. At the same time, for any company to offer such low plans, overhead must be cost: meaning sacrificing website design, features, and even support services in order for you to get the cheapest price possible. While their own website is built from a simple WordPress theme and is very low quality, you just can’t beat their pricing, which at the end of the day is the most important aspect.

Surprisingly reliable for the price

At the very least, they aren’t advertising themselves as the most reliable web host around — because they’re not. Most people don't have any issues with actual outages, or at least not that they've complained about publicly.  Some people do say that during peak hours their sites load slower than they would like, but for the price that is not really surprising.

In the highly competitive market that is web hosting, it’s surprising that no one else has come along to offer dirt cheap plans, allowing them to reach a much wider range of potential consumers. While the basic plans don’t include many features, for a ridiculous low price you can still get unlimited disk space and data transfer, add-on domains, and much more, all with cPanel.

If you prefer Windows, they also have extremely cheap prices, though with much more limited data and bandwidth compared to their linux servers. You can additionally purchase IP’s for any of their servers. Not only do they have servers in the US, but also in Australia, Asia, South America, Eastern and Western Europe, and the Middle East, as well as Canada and Mexico. While just like their Windows servers you won’t get the unlimited plans, you can still get a shared server in just about any continent on earth starting at the one dollar price.

Not sold yet? How about the fact they also have VPS servers that start at the same price! Features range widely depending on the plan, with the cheapest ones only containing 256MB of RAM. Who cares though, I know tons of uses for a VPS without needing much RAM, and now its available for much cheaper than any other company.

Some issues with technical support

While they advertise 24/7 support throughout all of their plans, I’m a bit skeptical of their support system. They have no address, they have no phone number, and they have no information about their company. I haven’t ever been able to get anybody in their live chat, but as I said earlier, it’s worth losing out on the support to get such cheap prices. It’s not like they aren’t there either — they have multiple emails you can contact and they will get back to you, just don’t expect A-List type speed or quality support.

Very low prices for all packages

If you’re interested in 1USDHosting, it’s most likely because of the price. While they offer $1 plans, that’s not all they offer — they have plenty of cheap plans for affordable prices.

Linux Shared: Standard plans start at $2.50 per month and for that price they can include 1GB Disk/10GB Bandwidth with the ability to host multiple domains. Otherwise, for the same price you can get unlimited bandwidth/data but only 1 domain and 1 database.

For their higher end Linux plans, you can get unlimited EVERYTHING, including disk space, domains, and databases starting at just $7.95 per month.

When it comes to their dirt cheap plans, for LESS than a dollar a month ($0.94), you can get a plan that includes 1GB of disk space and 10GB bandwidth. If you need a simple shared host, why spend 10 dollars or more when you can get it for one? If you purchase any of their yearly+ plans you also get a free domain name! In addition, if you were to purchase 3 years of their “100” plan, you can get unlimited EVERYTHING at what ends up being $3.61/month, half the price of paying month-by-month!

Windows Shared: Windows plans are a little more expensive but still affordable. The low-end plan starts at $2.95 per month, a steal for a Windows host. While it only contains 1GB disk/10GB data, if you need Windows, its totally worth it. Unfortunately even their high-end plans still are limited (for $46 a month you can get a Windows server with 25GB disk/100GB bandwidth)

Virtual Private Servers: Their VPS are just as cheap, with the low end plan starting at just over 1 dollar per month (minimum of 3 months), and even the much better VPS that includes a 4-core CPU with 2GB of RAM only costs $15 a month. Yes, if you want the best server you can probably find a better one somewhere else, but when it comes to “bang for your buck”, there is no better deal.

If you are looking for inexpensive hosting, this is a great option

What can I say? You get what you pay for. If you have a major business with traffic and needed uptime, I probably wouldn’t recommend it. But if you just need a testing server for your domains, or maybe a cheap VPS due to your internet connection or location, they are worth it. So many times I’ve found my self paying $10 or more for something that I should’ve really only paid 1 or 2, and 1USDHosting allows me to finally accomplish that. They are as affordable as you get in the industry.