netlify is a company you may have not heard of yet, but in a few years, we think you might. The small company has promise to reinvent the Internet, targeting new sites not built on a CDN platform to create seamless and super fast user experiences. We sat down with Chris and Matt, the two co-founders, who described their vision for creating a new Internet. It’s a really great story. 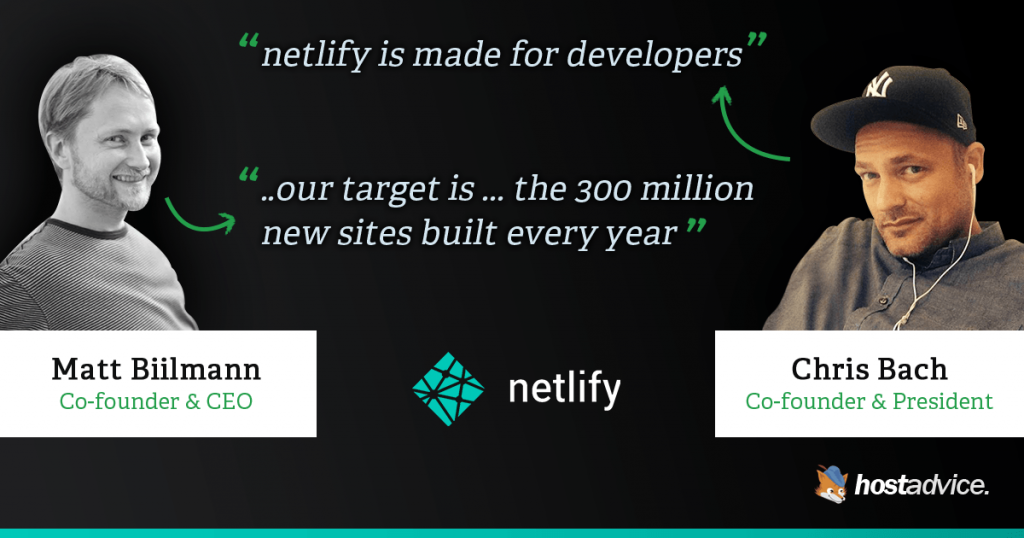 Can you tell us about how you founded netlify?

Matt: netlify was really born out of the cofounders’ experience building products for developers and agencies, including building large volumes of websites. I’ve built two commercial content management systems before, including Webpop, a CMS for agency contexts. Chris has founded, run and sold digital agencies, and we’ve known each other for 20 years.

While building these products, I started to witness a disruption of the web developers’ toolchain. People were starting to use modern build tools and frameworks in a workflow that was centered around Git (Gulp, Jekyll, React, Angular, GitHub, etc) and we saw an opportunity to create an infrastructure around that which could make it really easy to make high performant websites that didn’t need a broken legacy backend like WordPress.

What exactly does your company do?

Chris: Many have called netlify a “Heroku for the new stack.” What’s meant by this is that netlify provides a unified platform that automates all the processes around optimizing, deploying, maintaining and hosting your modern website or web app.

When you push your site to netlify, we do post-processing and host it on a multilayered global CDN.

So, the site itself is static but anything that needs real time updating (from e-commerce inventory, to a comments section, to web chat) is loaded from the browser.

This decoupling of the build process and the hosting makes the sites and apps built/hosted this way many times faster, more secure, and cheaper to scale. And all worries about gearing servers for traffic peaks go away.

What sites can be built this way?

Chris: Almost all sites can be built such that they can be hosted on a CDN and have anything that needs API communication done so from the browser.

We have clients that have international multilingual sites with more than 10,000 HTML pages and 20 content updaters that need updating many times a day. We’re also talking with an e-commerce solution that has 120,000 sites. The few sites and web apps that can’t be built with this approach are the ones that are constantly updating and are decidedly huge, like Twitter or Reddit. But it’s safe to say that they’re the exception. 99% of all sites could be made with the new stack and hosted on a service like ours.

Matt: WordPress is a traditional “dynamic” CMS. Every time someone accesses the site, it builds the site for them. If you have 1 million visitors, you also have 1 million page builds. Even if you put caching servers or CDNs in front, you still get very poor performance for time-to-first-byte and for loading the HTML. Not to mention that 80% of all WordPress sites are susceptible to known vulnerabilities.

Any website that needs to build when it’s served can’t be hosted on a CDN. So the answer is migrating legacy systems like WordPress to modern sites built with this new stack.

Though to that extent, our target is really the 300 million new sites built every year, and less so migrating an existing WordPress site to our platform.

How many employees are at your company and where are you based?

Matt: We’re based in San Francisco. We have a team of 6 people, and are working with a number of contractors as well.

What brought you from Copenhagen to San Francisco to found the company?

Matt: I originally moved here when I was working on Webpop, but when I started to work on netlify, I reached out to Chris. netlify is fundamentally a product for developers to build sites for their clients. Our main users are developers, and this area [San Francisco] is certainly the place to be for a company like this.

Chris: Major disruptions in tech – like, say, fundamentally changing how websites are built – tend to start in Silicon Valley.

Chris, what brought you from being a chief digital officer of a full service ad agency to what you are doing now?

Chris: A number of reasons!

I’m a hopeless entrepreneur. The last place I worked acquired an agency I had founded earlier on, and while working there, I really developed a desire to try and build something that scales. And Matt is my best friend; I’ve known him since high school and we wanted to do something together.

We wanted to really solve some of the core issues that we kept running into. Like performance. Especially with the emergence of mobile, we saw bounce rates going up and conversions going down. Cumbersome backends slowed performance tremendously.

Another point learned from the agency experience: agencies want a viral element to what they’re doing and don’t know what traffic they’re going to get. But if traffic explodes, there can be issues with hosting. And if you didn’t provision, it can break. Which means that all agencies basically habitually overprovision. It’s a very expensive process…

With a CDN solution like netlify, you eliminate that. It doesn’t matter if you have 1 visitor or 1 million, the site doesn’t have to be rebuilt every time.

And on top of that, the separation of the building and the hosting also means that netlify is completely agnostic.

We don’t care if your buildtool uses Python, Ruby, Node, or even PHP or .NET for that matter. Anything that comes out the other end is something we can host.

Who are the types of clients that you serve?

Chris: netlify is made for developers.

That said, our clients span from developers’ personal projects, to companies and agencies, to resellers that make site builders on top of netlify’s APIs. We serve large clients like WeWork and Sequoia Capital, to flagship agencies like Carrot and Instrument.

Can you describe your four service offerings?

Matt: Our tiers go from free to enterprise custom quotes. As the plans scale, features like pre-rendering, etc. are added on, and more bandwidth, storage, etc. is added. That said, even the free plans get 1-click SSL, continuous deployment, instant cache invalidation, and lots more.

What did you take away from working at ad agencies to netlify?

Matt: I’ve learned from my time building out large volumes of sites that it’s a necessity to build a repeatable process and workflow.

Chris: True, agencies need a viable workflow, not an overly custom method that’s hurt by when someone leaves. That’s why we built netlify, to create a workflow around the new stack, that makes it much easier for developers to just focus on what’s important – making great sites and apps. All the infrastructure and automation needs are dealt with by netlify.

Can you tell us the importance of the new stack vs. legacy ‘dynamic’ websites?

Chris: The importance of new stack vs legacy websites boils down to meeting five criteria:

Would you consider the technology you offer proprietary?

Matt: In the space of developer tools and the web, we need to champion open standards. We do a lot of work based on open source and give others the chance to contribute.

Chris: The only way to make this mainstream is to support the open source community and keep it open. netlify is very much based on open source.

5.0 379 reviews
4.9 109 reviews
4.8 139 reviews
HostAdvice.com provides professional web hosting reviews fully independent of any other entity. Our reviews are unbiased, honest, and apply the same evaluation standards to all those reviewed. While monetary compensation is received from a few of the companies listed on this site, compensation of services and products have no influence on the direction or conclusions of our reviews. Nor does the compensation influence our rankings for certain host companies. This compensation covers account purchasing costs, testing costs and royalties paid to reviewers.