Installing MEAN stack on your Linux virtual server (Ubuntu 17.10) has never been this easy. The following guided steps will take you through the installation as you prepare to launch your first MEAN stack application.

Mean, a web stack, that incorporates Node.JS, MongoDB, Angular.JS, and Express.JS. Use “sudo” to run commands with root privileges.

Your machine has to be set up in readiness for the installation. The first step is to update your Ubuntu repository. Open the terminal and type the following commands;

The next step is to ensure that git is installed. To install git type the following command.

Now we have the prerequisite requirements.

MongoDB is a server-side database that supports JavaScript execution by saving data in JSON format, for it does not support SQL.

Node JS is a JavaScript execution environment that acts as a server-side. Installing NODE.JS is done by running the following commands:

To install all the dependencies run the following commands

These are components of the mean stack. Bower is a package manager for the front-end apps, while gulp automates tasks. We will use global installation standards (-g).

Run the following command to install bower and gulp respectively.

Mean.io framework will be used for creation of apps. It will use Mean-cli as the core package. In order to install Mean-cli, run the following commands:

to check whether the installation was successful run the following command

To create the first project on Mean.io run the following command:

where ‘myapp’ is the name of your application.

You now need to access the directory with app by running the following:

To initiate the new project run the following

This should give you something like this on your browser on  http://localhost:3000 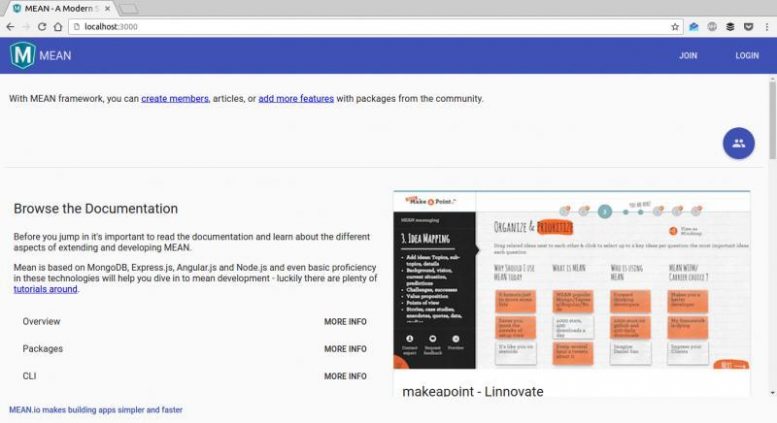