Ryan Singel is probably best known for his years as a writer and editor at Wired, and for his passion and involvement in technology policy and privacy issues. But Ryan is now on a different mission – bringing engagement and personalization to web sites of almost any size. We chatted at length about the company he founded – Contextly – and we also touched on some of his past as well. 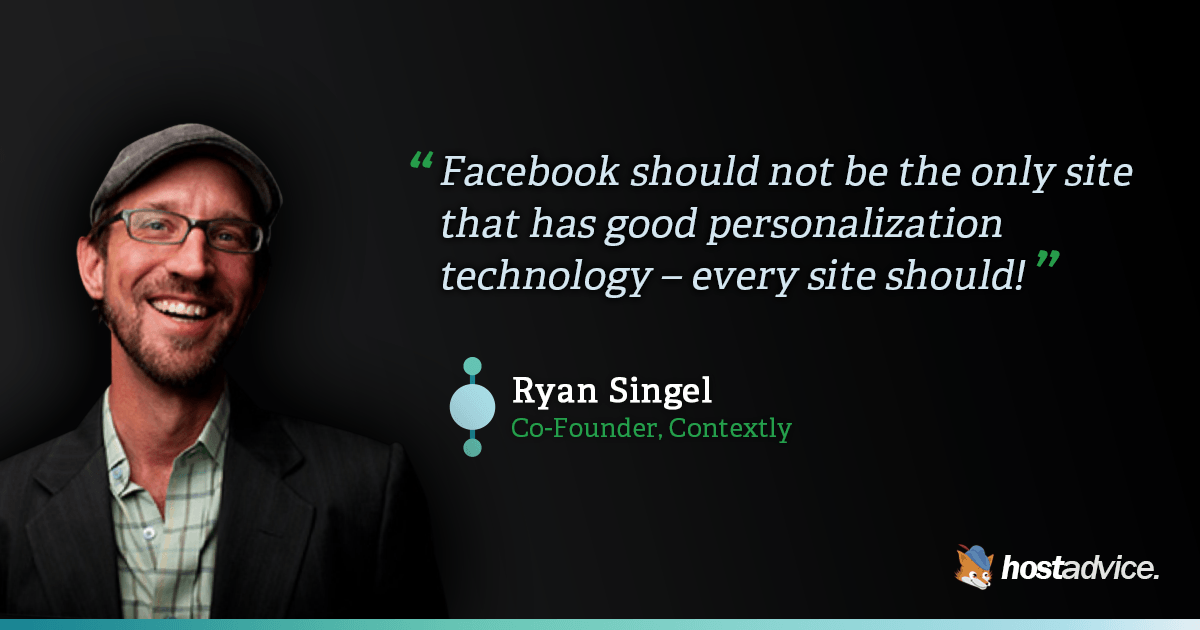 HostAdvice: Before we talk about Contextly, the company you co-founded, let’s talk about your ten years before that, writing and editing for Wired.

Working at Wired was really great.  There were actually two sides to the business, each with a different owner and culture. The online side was owned by Lycos and was a small, scrappy organization, without much budget. The magazine (print) side was much larger and owned by Conde Nast and was not allowed to have a web site. They were highly staffed and more “New York-ish.”

I was always on the online side, focusing mainly on privacy, civil liberties, and security. I worked with great reporters and fantastic editors – I just loved it!

HostAdvice: It was during your time at Wired that you discovered the need for something like Contextly – correct?

Definitely. Wired had  beat writers who would do deep dives into topics such as security, defense, and gadgets. We always wanted some way to add related links back to the original stories, but that usually resulted in a lot of copying and pasting. Our first attempt at trying to improve that system was developing HTML templates for the posts.

I then thought  we could totally automate this with a little search engine that would then auto-fill the HTML templates. I remember that I was taking a shower (where I generally got my best ideas) when I realized that these relationships belong in a database that would then provide a kind of service to the web site.

I started worked on this while I was still at Wired.  They were very supportive and later became our first customer. This was a great opportunity, since I was able to get fast feedback and provide fast fixes. We progressed quickly and then founded Contextly.

HostAdvice: So what exactly is Contextly? Another related links plugin for WordPress?

Well, it used to be a related links plugin, but we have come a long way since then.

Publishers need a smart way to build loyalty, and readers need a great experience. Contextly is an engagement platform that helps publishers and readers solve this problem. The platform lives outside of the WordPress infrastructure; SQL databases are just not meant for these kind of operations. Our platform is API-based so it works with any CMS.

Our platform offers multiple engagement hooks. For instance, we offer email notifications in the form of our FollowUp Button. This feature allows readers to subscribe to any story, and we deliver continuations of that story or theme as they are published.

We are about to publicly launch more notification features – personalized emails and something we call “Channels”.

Our personalization email feature will send subscribed readers new stories based on what they read in the past. The personalized emails are fully-automated, requiring no editorial oversight.

Channels are constructed by breaking all of a publication’s stories into thematic buckets, and then letting readers subscribe to those buckets. Readers are notified when a new story appears in a Channel to which they are subscribed. For example, some Channels on a tech blog might be OSX, Apps, Games, Venture Capital, etc.

HostAdvice: Who is your target audience?

We currently target two types of publishers that we feel would benefit the most from the features offered by Contextly:

What these sites have in common is that visitor loyalty is critical to them – more than volume – and that they are looking to monetize the visitors only after they have developed deep relationships with them.

Facebook should not be the only site that has good personalization technology – every site should!

HostAdvice: Most WordPress plugins work on the freemium model – they offer a functional version for free and then an upgraded version for a fee.  You haven’t taken that path – you don’t offer a free version, only a free 21-day trial.  Why is that?

Actually, we used to have a freemium model, because we wanted to get a lot of feedback. However, we found that the free users required the most support and it became too much of a burden, so we switched to the free 21-day trial.

HostAdvice: I see that the plugin hasn’t been updated for six months – why not?

We’ve been doing a lot of infrastructure work on the backend and on our servers, in addition to the major personalization feature I mentioned previously.  You’ll see a significant release coming very soon.

Just as a FYI, we shipped 4.1 last week, which had a big update to let us place sidebars in the body of every story on a site – using a rule based system. Also, since we are a SaaS (Software as a Service) company that the WordPress plugin talks to, most of our updates happen on our side without WordPress users having to update their plugin.

HostAdvice: How many active customers do you have today? Where are they located?

Contextly is currently being used by web sites all over the world, with the majority of them in the US.  Most of the sites are in English, although it is used on sites in Spanish, Chinese, and Malaysian.  Since our engine is based on tokenizing (parsing the difference between words), it is rather seamless to support non-English languages.  Japanese is the hardest language to support, but we do have paying clients for Japanese sites as well.

I can’t give you sales numbers for publication, but I can tell you that we are cashflow positive.

HostAdvice: Who are some of your biggest customers?

Some of our biggest clients, some of whom have many different sites, include:

HostAdvice: How do you reach your target audience?

We engage with our audience in four different ways:

HostAdvice: Who do you see as your main competitors?

Our main competitor is actually internal technology teams, where companies try to handle personalization, newsletters, and engagement on their own.  We don’t compete with companies like Outbrain or Taboola, since they focus on advertising and external links, while we focus only on on-site content.

HostAdvice: What are your future plans for Contextly?

We currently have two major future goals for Contextly:

We are also going to further explore social media, to get more interesting data / feedback and to discover new influencers. We already do that to some extent – we currently monitor Twitter for a site’s content and if there are more than three significant comments on that story, we will pull in those tweets and show them on the story’s page on the web site. 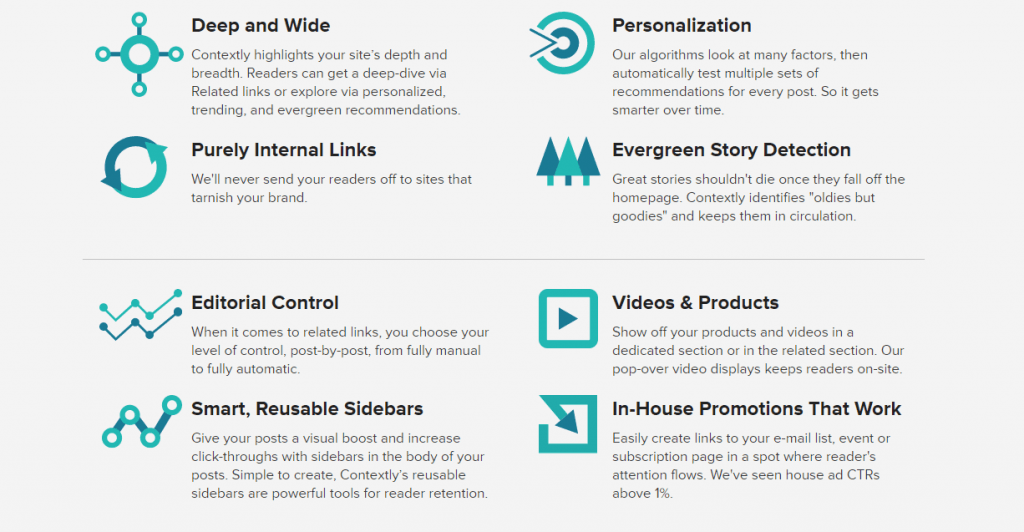 HostAdvice: Before you worked at Wired, you spent a few years at search startups – right?

Yes I did. I was an English major, but at that time – the late 90’s – it was easier to find work at a startup company than as a writer. So I worked for a few years at various startups, including Ask Jeeves.  After the crash in the early 2000’s I found my way into Wired as a freelance writer and then eventually I got a staff position there.

HostAdvice: How has the world of startups changed since then?

Back then, Google was just arriving on the scene, so searching the web was still a very manual process.  Servers were very expensive and the tools we had were very primitive.

So much changes when you have such rich base features and free/cheap technology and tools. You now have the ability to start fast and build your technology on top of those base features.  Today it is easier than ever to start a startup with even greater ambitions than in the past. It is just so much easier to build cool stuff than it used to be.

One of the problems that I see for startups today is that it is difficult to get funding for a company that is “just” sustainable and a good investment. Investors only want to fund companies that they feel have the potential to become billion dollar companies. 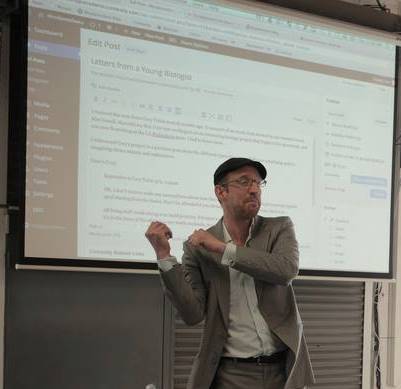 HostAdvice: How do you think the world of startups will change in the coming years?

HostAdvice: You are also very involved in technology policy and privacy issues. Tell me a little about that.

As I got more involved in the industry, I grew to be both passionate and concerned about technology and privacy issues. Especially after the exposure of NSA (National Security Agency) activities I became very worried about “who was watching the watchers.”  At Wired, internet privacy was a core value and we were very aggressive on these issues. This has been carried over to the design of Contextly, where the user can block tracking and we can still deliver good recommendations.

HostAdvice: How many hours a day do you normally work?  What do you like to do when you are not working?

HostAdvice: If you were asked to give the graduation address to the class of 2016, what would be your message to them?

You can own a lot of your own digital identity – be sure to buy your own domain and use your personal email address as much as possible.

Understand technology – you need to understand how this world around you works. Technology and the network is all around us and they are fundamental to understanding life in the next 20-30 years.

Don’t forget to think about what tools you need to keep you safe from online threats.